We see this all too often and it really shows that so many haven’t really understood photography for too long.  The no-filter, no PhotoShop crew that believes that there is something inherently better in an image that (they believe) has not been manipulated in any way.

I read this nearly every day on images created by incredible photographers (and on my images as well).  What is interesting is that those making the comments are missing the fact that photography is not simply a press of a button and every instance comes out the same.

Now I understand and appreciate, that many photographers push their “as seen through the camera” artwork.  It is great for marketing and creates the “image” that these photographers are somehow in amazing places at just the right time as the individual acquiring their work.  It “sells”…

Ok, on to the discussion points!

Many are very quick to comment that “before digital we shot film and what you shot was what you got!”  Um… wrong!  Why then were there 100’s of film types with various ISO’s and different saturations by different manufacturers.  I shot Fuji Velvia 50 almost exclusively for anything non-human above the water and Ektachrome for UW images (and oddly, used flashes and red filters there due to the suppression of red wavelengths) For portrait photography I loved Kodachrome while I could get it and at times switched over to photo-negative shooting as well.  All of that JUST covers the file in this argument! Printing was (is) also done on different papers, with different dyes with dodging and burning and different chemicals.  All resulting in a better image (without Photoshop)

Every camera that is available from any manufacturer is going to capture a scene differently.  12MP, 24MP, 48MP… all different.  CMOS, CCD, Foveon and other sensors.  Pixel demosaicing… it goes on and on!

Did you know that the sensors themselves “interpret” the color transition over their surface?  That is, each pixel on a sensor only reads one color, so it look to its friends next door to really figure out what color it is “seeing”.  Also, there is something going on where red pixels are not welcome as there are far fewer red sensing pixels on most sensors that green or blue!?  Again, it’s a computer deciding what you see and thus what it thinks the best version of the image should be!

Algorithms; you hear this all of the time, but anyone shooting images in the jpg format is really seeing images as the cameras firmware “believes” the image should be portrayed.  That’s right, its “manipulated”, i.e. “Photoshopped”, right there in your camera!!  Try taking 5 different point-and-shoot cameras out, take the same exact picture.  Not one will match any of the other 4!!  The cameras imaging firmware will do its best to not only capture the scene, but it will do all that it can to make the scene appealing.  (they need to sell cameras after all).  Each manufacturer has its leanings with respect to saturation, contrast, clarity etc., and they are all different.  All resulting in a better image (without Photoshop)

So what is RAW format?  “My camera has it but the images come out flat and boring!” RAW format in its simplest form is just that, the image captured by the sensor of the camera in its raw form with no in-camera algorithms, no color management added etc.  It is the raw data of the image that the camera saw through the lens.  It is the ONLY format that I shoot in.  (actually, I’m a Nikon guy, so I shoot in NEF which is then converted by Lightroom when I import the files into my digital studio). I then apply the color correction (typically Adobe Landscape), curve modification (scene based) and lens corrections that are needed to best represent the scene that I am looking to share!

Ever heard of optical compression?  Take a 500mm lens and take a photo of a house with the moon behind it.  The moon is going to look HUGE!!  Get really close to the house and take the same picture so that the house is the same size and the moon will be a blip in the background.  Image manipulation, plain and simple.  Wide Angle, Natural field of view, Telephoto, Macro and even phase-shift lenses manipulate the end product in a way that is more appealing.  All resulting in a better image (without Photoshop)

Why have cameras always had at a minimum the 3 basics, Aperture, Shutter Speed and ISO settings?  To manipulate the image to a more appealing result without the use of Photoshop!  Do you need to make the primary subject stand out, wide open aperture will make the subject jump out from an out of focus background.  Need to capture a fast moving subject with a crystal clear image?  Super fast shutter speed.  Its dark out, High ISO…  All resulting in a better image! (without Photoshop)

Wrap it up soapbox guy…

The thought that an image is inherently better because there was no filter or not subject to post processing in Lightroom/Photoshop/On1 etc. is simply naive as to the history of image creation. Photoshop (Lightroom, etc.) provide the photographer to achieve most of these results in post processing without the headaches of the film based past!  I still shoot 4×5, Medium format and 35mm film with just about every camera that you can think of and some that you likely didn’t know existed! 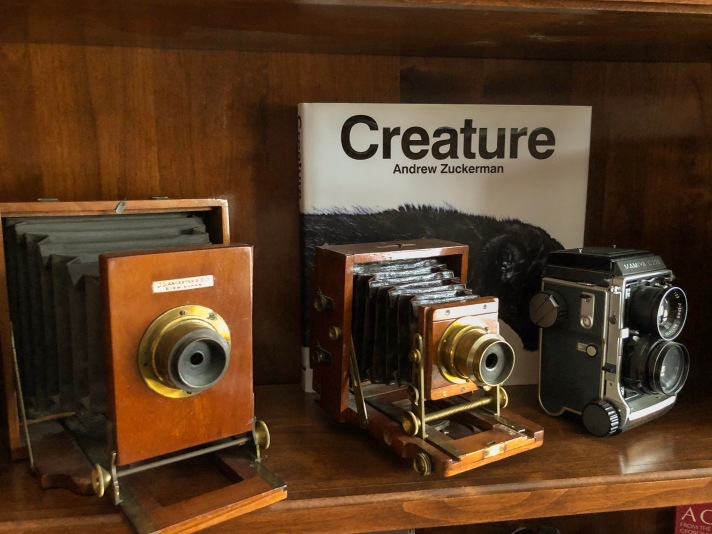 Photoshop is NOTHING MORE than a digital darkroom!  People that are skilled with its tools will do nothing but create a pleasing image that represents what was in front of them when they pushed that little button.

Ok, so can it be overdone? Absolutely!  In the Instragram/Facebook world of marketing and likes, it is clear that over saturated images of specific scenes garner much more attention that a high quality, artistic image.  But those will not sell and you will never see them hanging on a wall in a prominent location to be enjoyed.

My own images have very clear metrics that are so telling that it modifies my complete marketing approach!  Oversaturated, pink sunrise/sunset images CRUSH the metrics on social media.  I have NEVER sold a single image of a pink sunrise or sunset.  Not ONE!

Using Photoshop as a just that a Digital Darkroom and Studio is nothing more than selecting a film type, print paper and processing details in the past.  Images have always been “Photoshopped” and always will be, and the skill today is no different than the skill in the past to present an amazing end product.  Only the technology has changed.

View all posts by rmballgalleries